The authorities decided to conduct the examination for the post of Somaj Kormi Union of the Department of Social Services on 24th December 2021.

But unfortunately the test is not being taken in time, said the official in charge of the social services department.

Today, on 23rd December, 2021, a notice of suspension of the examination was published on the official website stating that the written examination for the post of Somaj Kormi Union of the Department of Social Services was scheduled to be held on 24th December, but it will not be held.

After this announcement, the applicants from all over the country are eager to know when their exams will be taken again.

For their purposes we would like to say that we have learned through a new news that the authorities have learned to say by announcing the date of a new examination and it will be communicated to every applicant through the official website.

After a long hiatus during the Ron period, the Department of Social Services published a notice on the official website on December 21 stating the date of the examination with the aim of collecting the admit card from each applicant through an office. 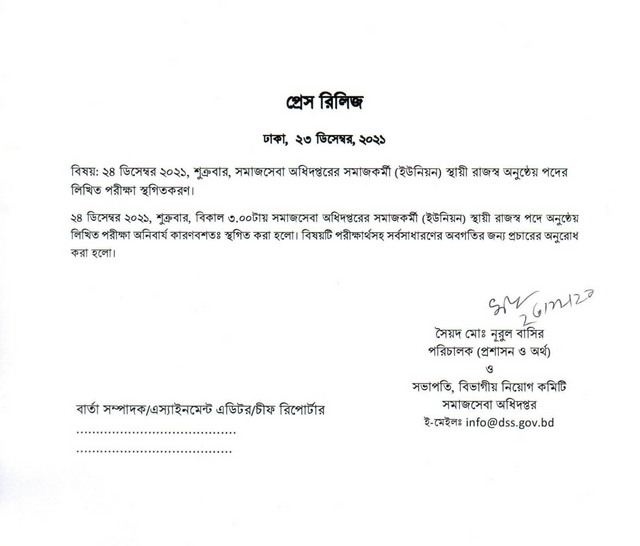 Each applicant has already collected their Admit Card as well as their seat plan.  But unfortunately, due to unavoidable reasons, it is not possible to take the test at the right time, the authorities said.

In this situation, every applicant is curious as to when they will announce the date of the new examination.  No test date has been set yet by official notice but it will be announced soon, he said.

If you are an applicant then the good news for you at the moment is that a senior official of the Department of Social Services has informed us that even if the exam is postponed, the exam may be taken in the first week of January of the new year.